Here is Agonda beach, the first in the alphabetical order of the beaches of Goa, India, a beautiful 3 kms (almost 2 miles) long and broad beach of South Goa, as you can see on these photos below. 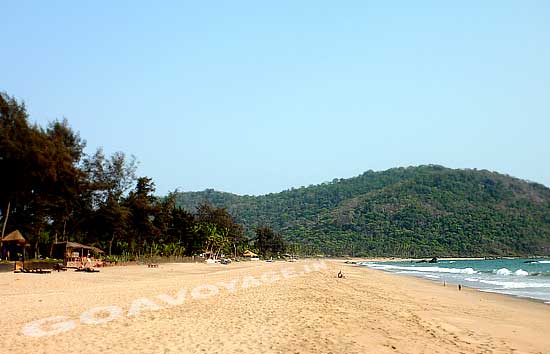 An Agonda beach view towards south. 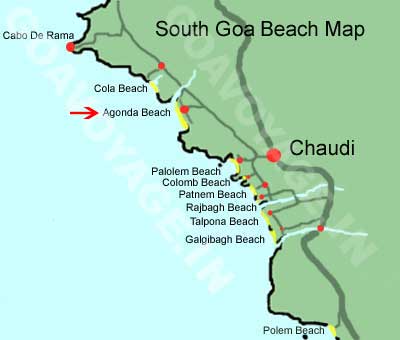 Agonda access is easy, and can be reached through the national highway, which is rather busy, or by a small road coming from the north side, passing by Cabo de Rama, where traffic is much less and the scenery beautiful. 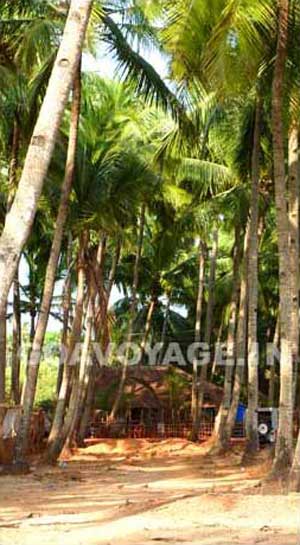 Agonda beach is the second longest beach of South Goa, far behind of course the 26 km beach in Central South Goa.
Agonda is a great place for those who are looking for space, an authentic village life and enough touristic activities during the day not to get bored. but at night, it’s … village life…
Tourism developped a lot in Agonda these last years, and there are more and more huts and other tourist accommodations.
Nevertheless, Agonda has a big beach which is not crowded yet! It has till now kept a traditional look and a peaceful atmosphere.
The village of Agonda spreads on a large area, going from the beach till the main road a bit inland.
To move around it’s a good idea to rent a scooter or a cycle for the sporty ones, especially if you intend to go to Palolem a few kilometers south. But if you prefer, you can still take one of the numerous buses, rickshaws or taxis that will take you wherever you wish to go.
Note that Agonda is about an hour driving from Margao, the main town of South Goa, but the main burg where you can find everything, Chaudi, is half an hour from there. 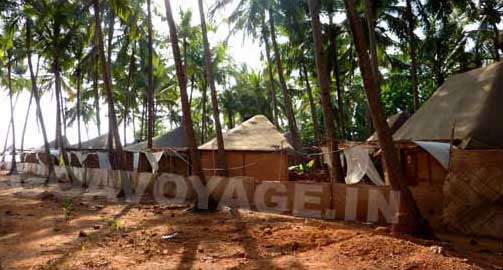 These pictures have been taken in April 2010, at the end of the tourist season. Little has changed since then.
We’ll start with the beautiful south part of the beach with its round rocks to finish with the northern part of it. 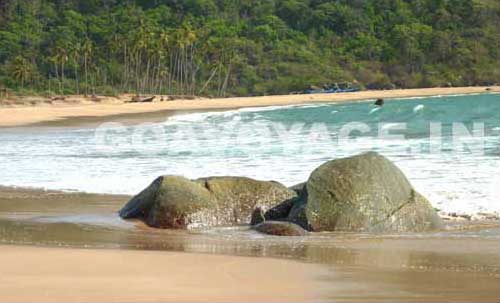 The curve at the end of the south part of Agonda beach with its big rocks.

As I said at the beginning, Agonda beach stretches on about 3 km (about 2 miles). It’s not only a long beach, but a broad one, facing the west and its beautiful sunsets, as almost all the beaches of Goa. 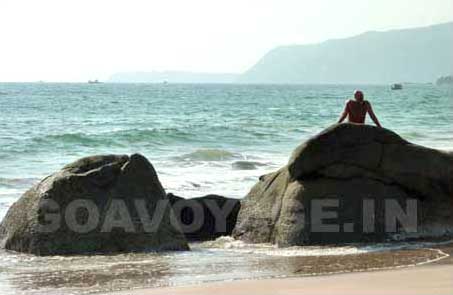 There are some who appreciate the view from these big sea-rocks. 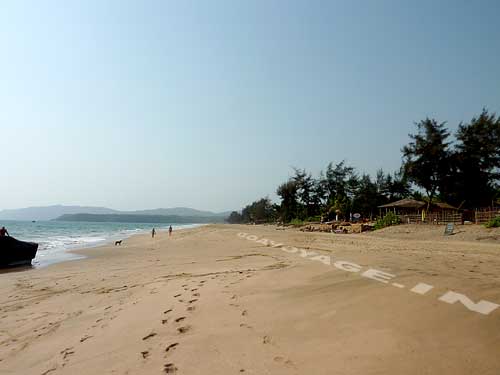 The beach stretches as far as you can see.

The Beach shacks spread evenly all along the beach and there’s plenty of space for everyone.
The south part of the beach has some fringes of coconut trees and these specific round rocks that you also find in in the south of Palolem beach, a few kilometers away. Agonda beach is less famous than Palolem, but has no reason to be jealous of its famous neighbour: especially now that Palolem has become so crowded! They are really different actually, and complementary. 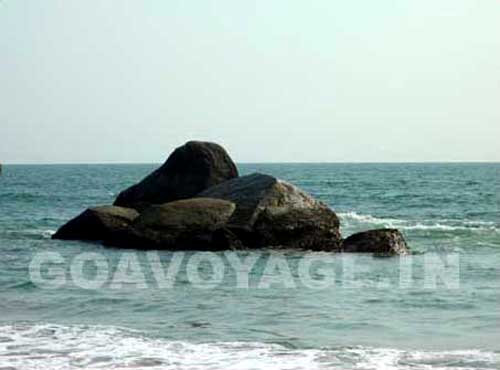 Another pile of big rocks in the sea.

As all the goan beaches, Agonda beach is an ocean beach, with its moods, but is safe too swim if you stay close enough to the shore, and there’s no slope till the water, making the shore pleasant. 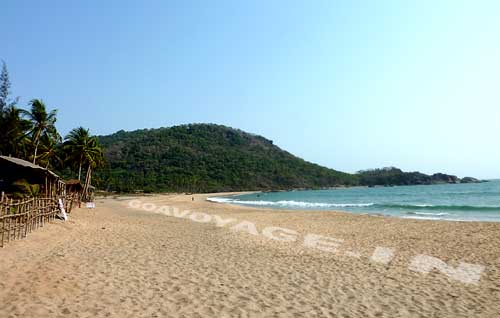 A view of the southern part of the beach.

A beach shack in Agonda 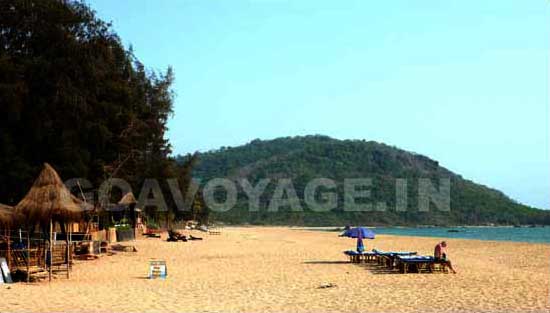 Agonda has definitly a beautiful beach!

You can see above that Agonda beach is a broad beach. 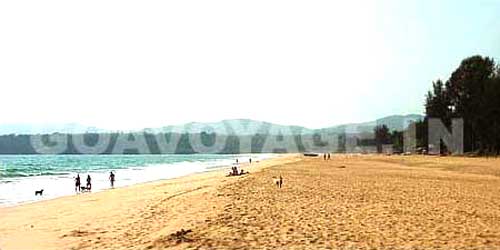 View over the northern part of the beach 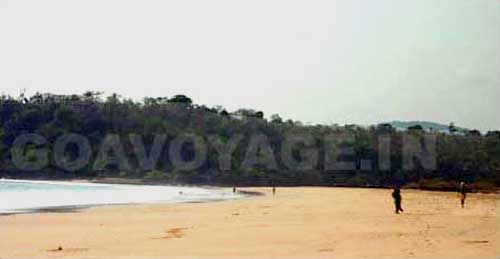 The north part of Agonda beach

Here is now some pictures of  accommodations you can find in Agonda beach. 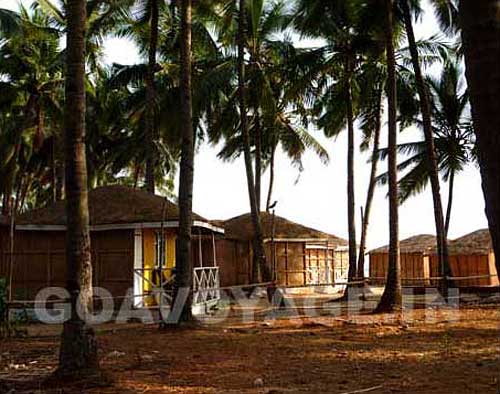 Nice wooden and coconut huts by the beach in a coconut grove. 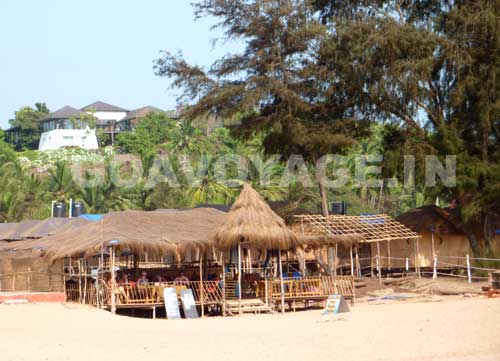 Front, a beach shack and up behind, accommodations with a wonderful view over the sea. 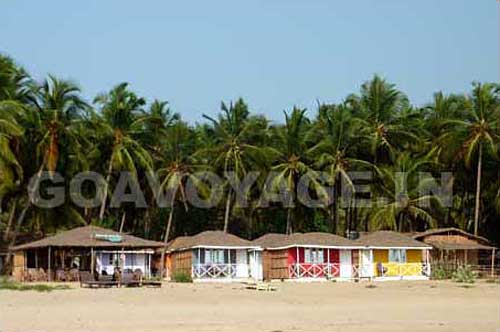 You can sleep right on the beach! 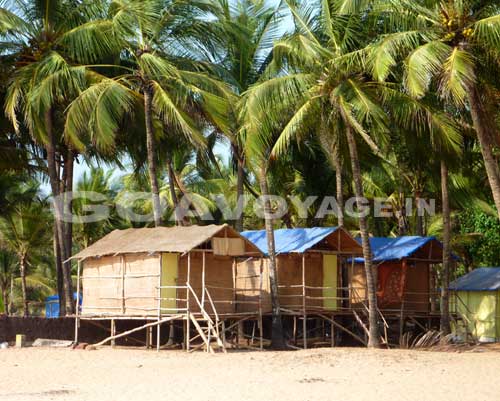 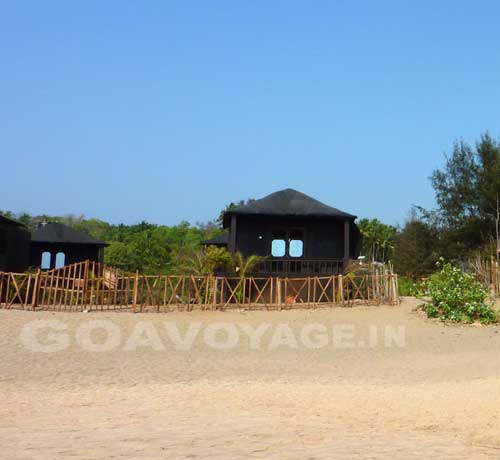 You can even find black huts!

You can find all types of accommodations in Agonda: even some “scary” ones, Adam’s family style! 🙂 And for all type of budgets. 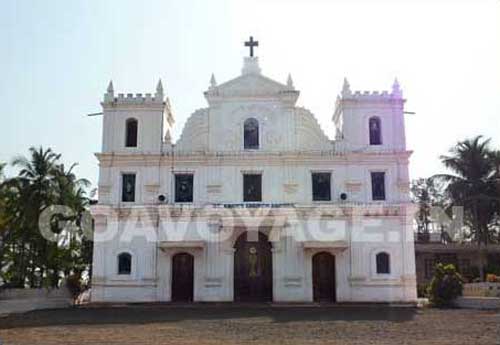 After crossing a small bridge, you reach a T-junction, and face the Agonda church that you can see on the picture above. On both sides spreads the long main Agonda street, parallel to the beach. 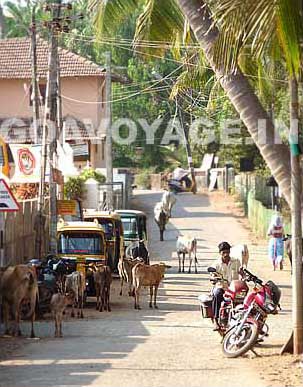 There, you are in the midst of the local life, with the farm animals roaming around in the street, and the rickshaws waiting for a client.

You also have restaurants, some shops and nice houses, indo-portuguese style and modern indian one with their compound wall. 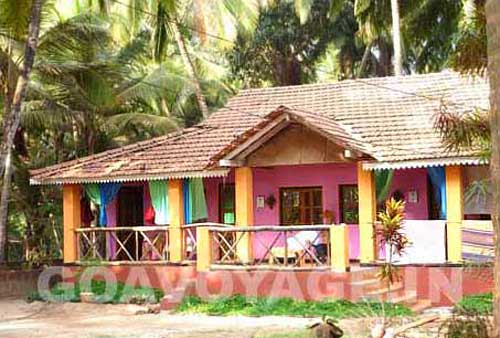 Above, a colourful goan house, one of the main charm of Goa. 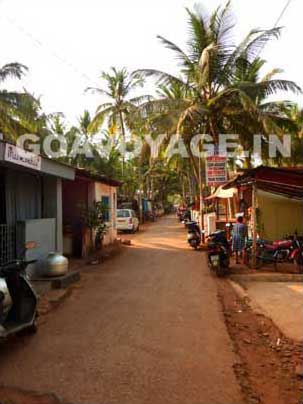 On the north side of Agonda, the street is full of shops and gets narrower… 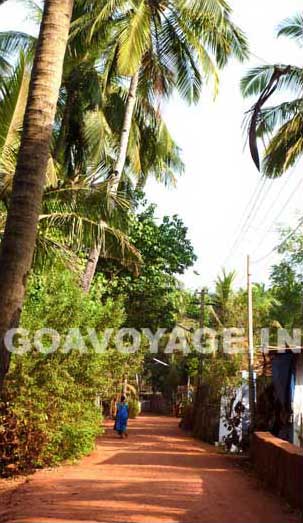 …till it becomes a mud road.

If you follow it, you can reach the main road but only with two-wheeler or a small car.
That’s it about Agonda beach!