Quite well-known in Goa, Arambol beach is one of the last northern beaches of the state, far from the airport at the moment, but not for long if the Mopa airport project at the border of Maharashtra sees the light one day. 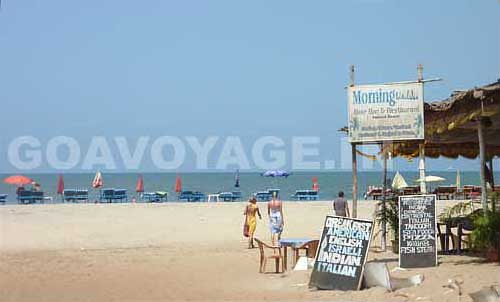 Arriving on Arambol beach from the main street on the north side of the village.

Now, if you go to Arambol, you’ll find all kind of tourists and amongst them some hippies and there used to be many Israelis here. But now, the fashion in Goa is Russian, and you see many boards written in Russian everywhere on the goan coast. 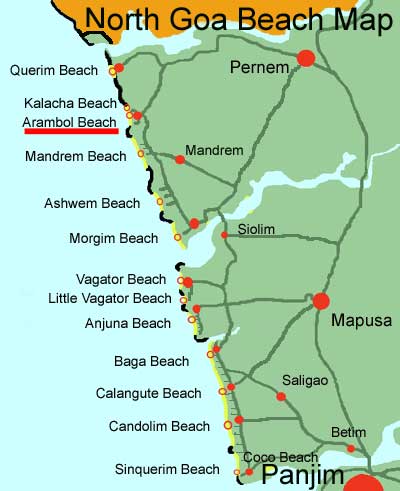 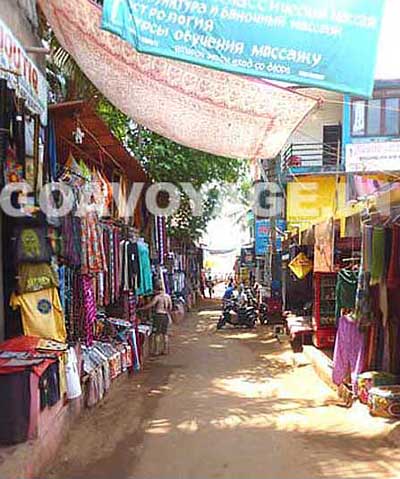 The main street leading to the beach. 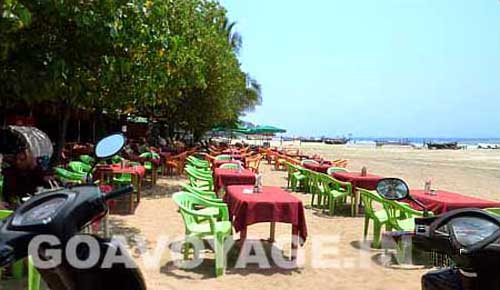 A restaurant right on the beach.

The commercial part of Arambol village is located along the main street running in parallel to the north part of the beach and ending up reaching the beach. There you have all the tourists’ stuff to buy all along.

Below are some samples in pictures of what you can buy in Arambol.
The shop below is selling lamp shades, statues, the Christmas 5 star that goan people hang with a bulb inside to illuminate their front door during the Christmas period.

By the way, Christmas in Goa is really a good period to come. Not only the weather is really pleasant, but the Christmas decorations are all over the place, and houses are full of blinking and colourful lights for some weeks. 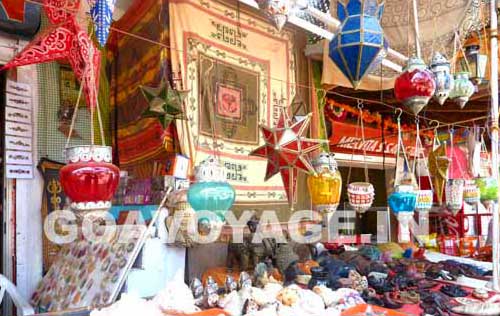 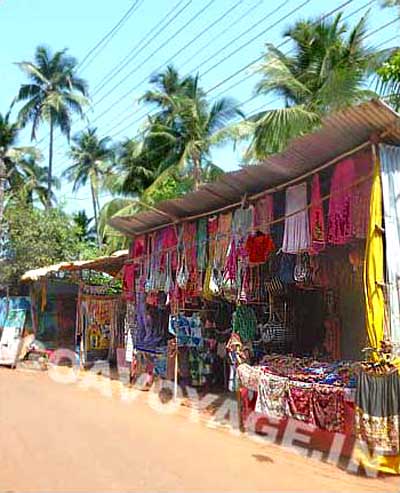 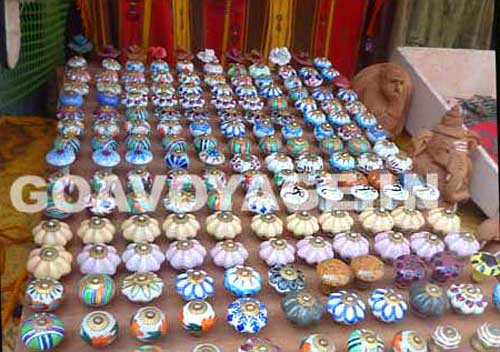 … and something different: knobs for sale. 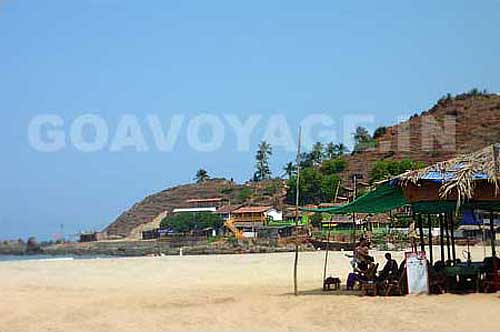 The north part of Arambol beach.

On the picture above you can see the hills between Arambol beach and Kalacha beach. You can go to Kalacha beach through a pathway between the two beaches. On the picture below you can see in the background, the lane of shops along the coast, leading to Kalacha.
In the foreground, are sitted Lamanis women who sell items on the beach during the tourist season. Most of them can be quite pestering, but some others are nice. An advice: always haggle with them! 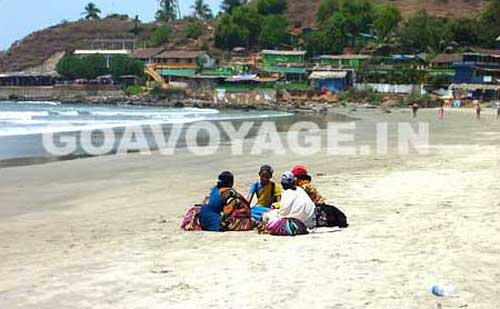 Lamanis sit on the north part of Arambol beach.

The main access to Arambol beach is from the north side of the beach, but you have many other access ways to the beach, and we gonna see some of them later.

Now, better than words, let’s look at some pictures of the north side of the beach. 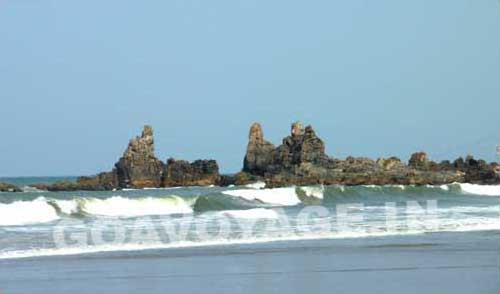 Rocks in the sea in the north part of the beach. 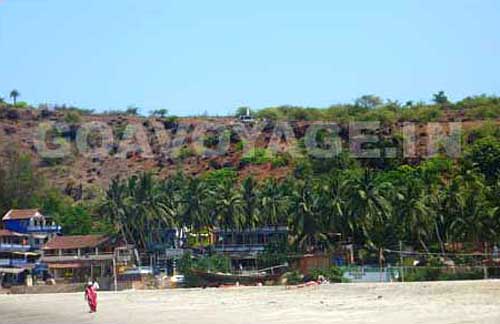 The hills behind the beach on the north part of Arambol. 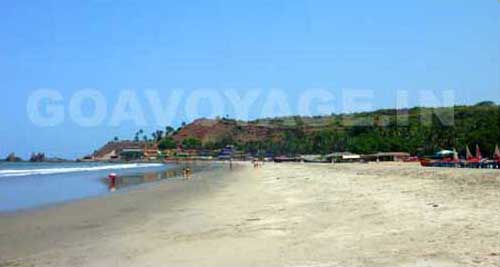 An overview of the north part of the beach. 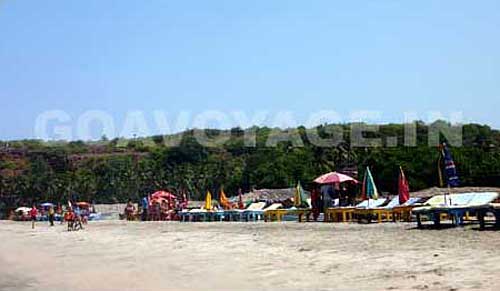 Beach beds and their parasols in Arambol.

The busiest part of Arambol beach is the village, on the north side of it, but it’s far from being crowded as in Calangute beach for example. As you can see with the picture above, it’s still reasonable. 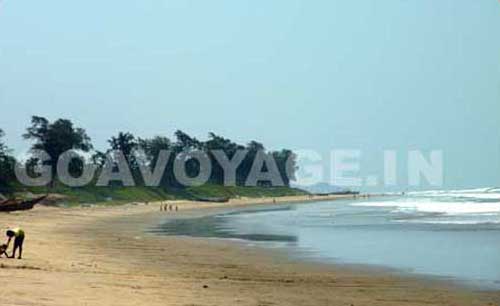 A view over the middle part of the beach. 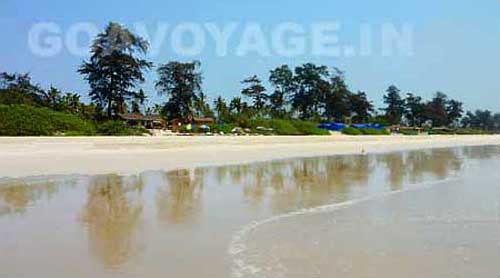 A view over the south part of the beach. 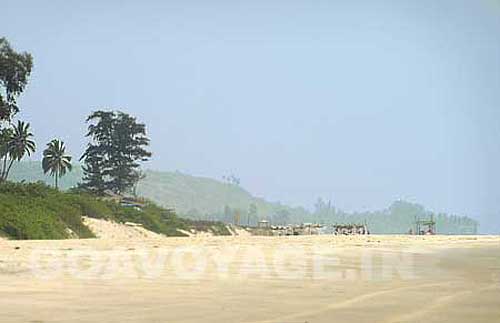 You see the pine tree on the left? This is where Arambol (Harmal) beach stops and where Mandrem beach starts!

Now, let us have a look at some pictures of what we’ve seen, walking down the beach. 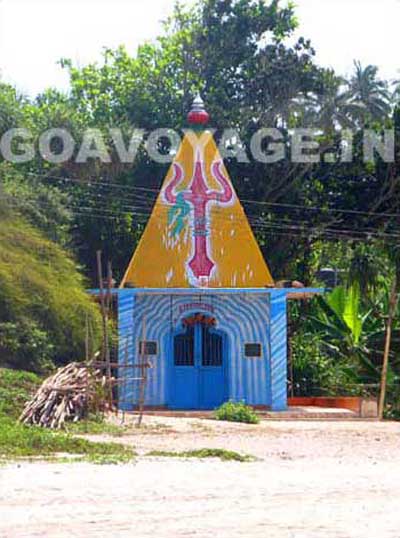 This hindu temple on the beach is really kitsch! 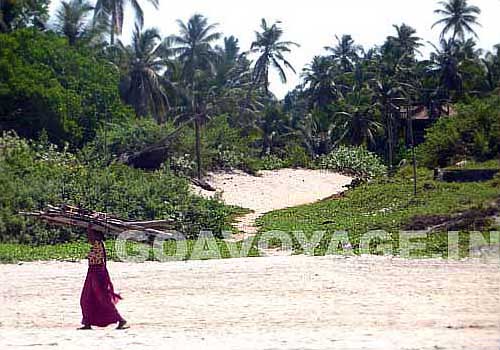 You can see quite often on the beaches in Goa women with wood on their head, that they collect on the beach or behind. Some are working… 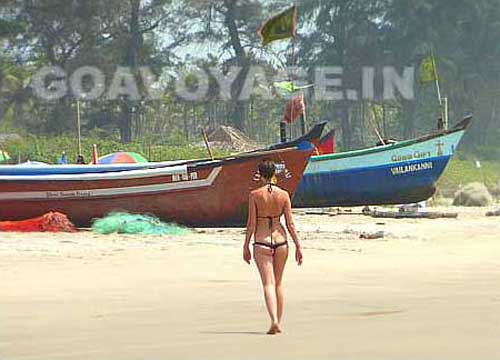 …and some are on holidays, enjoying the beach life.

We’ll see now the back side of the beach, as we were walking back to Arambol village. 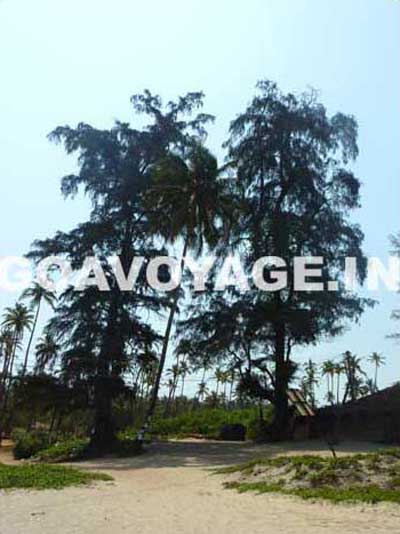 These 2 huge pine trees mark one of the many other access/exit to the beach. 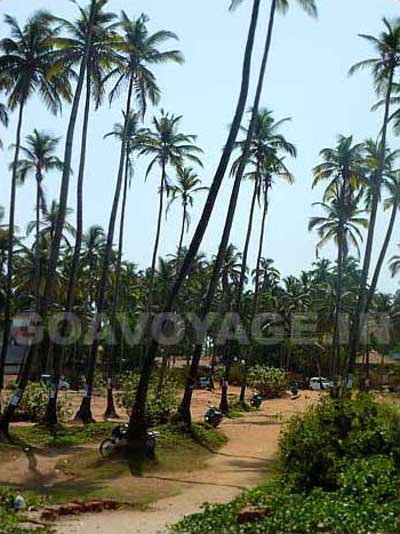 And behind these lines of pine trees, there’s a huge coconut grove. 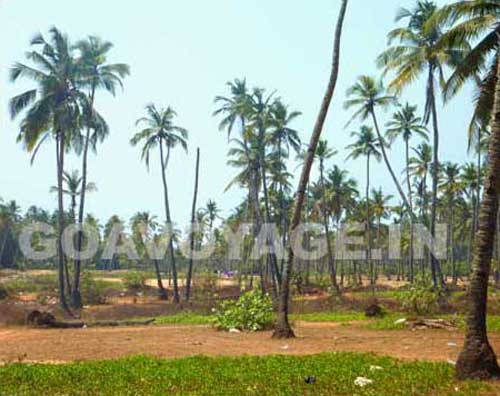 The coconut grove in Arambol spreads over a very large area. Once I got lost in it! 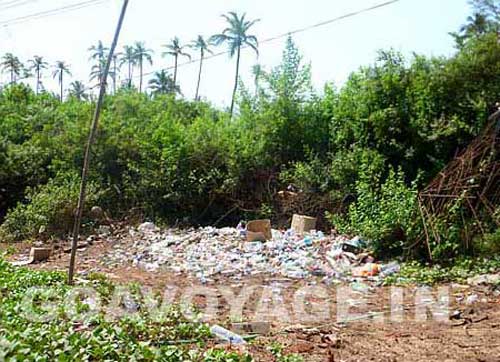 The usual beach shack garbage behind the beach: Yuck!
But I have to say that things are improving, but slowly! Arambol 2015 is less dirty than in 2010. 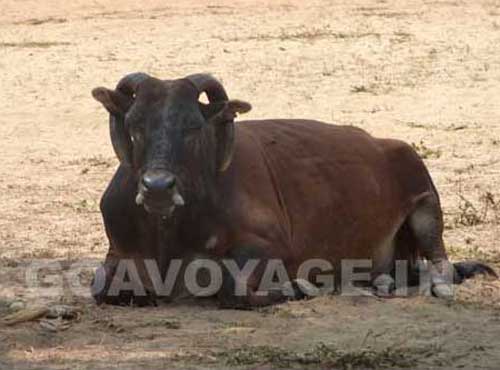 On the way, we met this beautiful beast, resting in the shade.

Now, some random pictures of the village and some help in the directions. 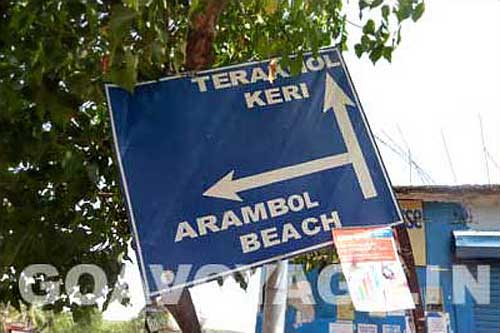 Oh! This road-sign board has been hit by something, but it still indicates the right directions. 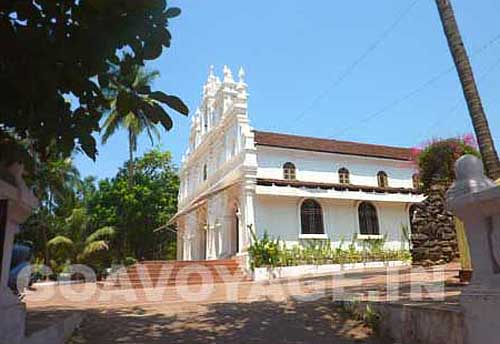 Even if the hindu religion is more present in north Goa, the catholic churches still display their immaculate limewashed white color. 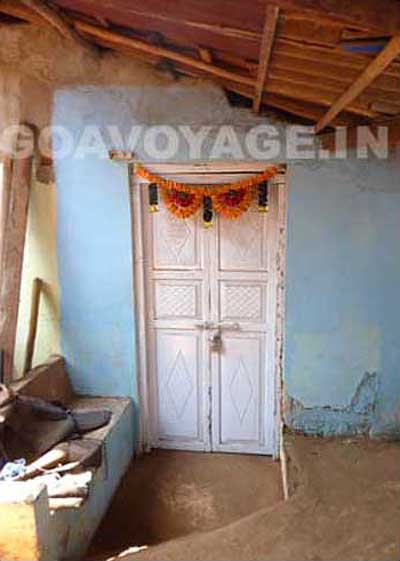 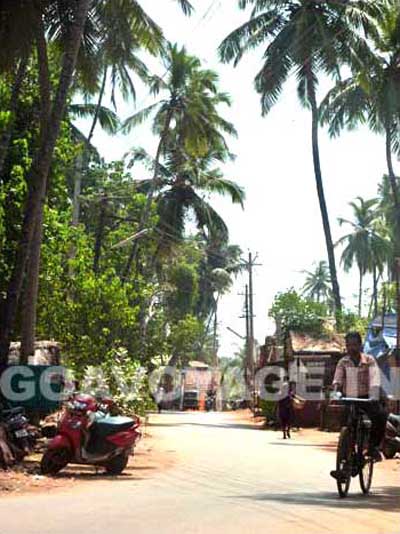 The main street of Arambol, on the peaceful side… 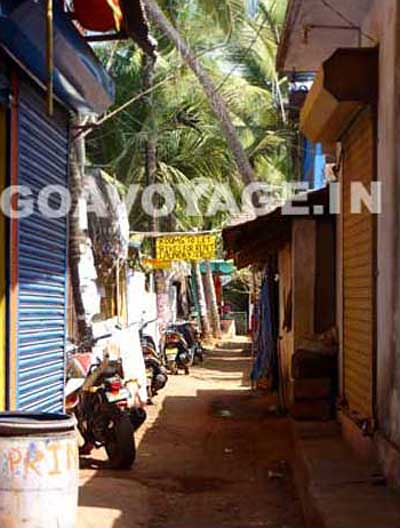 … and a tiny lane where only 2 wheelers can enter.

HOW TO GET TO ARAMBOL BEACH?

If you come from the north, from the highway, take the Pernem direction, and once in the village, head west. You’ll be on a small road that will lead you directly to Arambol.
If you come from the south, after Siolim you cross the bridge over the Chapora river, and you can go to Arambol either through Morjim (small roads), or follow the main road going on the right after the bridge. Less than a kilometer further, you can either go straight or take a big U turn on the left. The U turn leads to Mandrem and then Arambol: just follow the road, it’s easy to find. Once in Arambol (next village after Mandrem), you’ll see a turn on the left with the half-broken sign board you saw above: this is the way to the many ways to the beach.

Next beach on the north: Kalacha beach

Next beach on the south: Mandrem beach

Go to Beaches In Goa, India, A Travel Guide, to see the maps of Goa, and to have some advice on how to post your pictures.