Goa weather is an important factor to take into consideration when preparing your Goa vacations, even if the decision concerning when to come to Goa can depend on factors other than the Goan weather, for instance, the possibility to choose when you can come, or the cost of living, or your likings.

So, you will find in the following article a Goa weather guide, a description of the different seasons in Goa as well as what you can expect from the period you wish to come. After 10 years spent all year round here in Goa, here is my experience of it.

Goa weather is officially divided into three distinct seasons: winter, summer and monsoon. The transition between two seasons varies from one year to another. And actually we could say that there are four seasons with the transitional period between monsoon and winter, which lasts usually two months, October and November, and which has no name. There, you can expect more or less rains, but the weather becomes overall dryer.

Winter starts after this transitional period and lasts from November December to the end of March. The weather is wonderful at that time. It is sunny and windy in the daytime and cool in the night-time, and there is no rain, The ideal tropical climate! 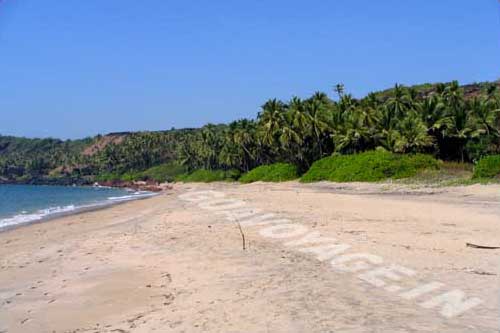 Winter and its blue sky

In November, the sea being calm again, Bamboo shacks start to flourish on the beach. The sea is blue and warm. Didn’t I tell you that the sand is wonderful in Goa? So fine that it squeals like snow when you walk on it. In the daytime, a nice wind soothes the hot sun and the vegetation that grew during monsoon is still green.

Animation is at its peak at that time. At night, parties end up late and nightlife is active, especially from mid-December to mid-January. But you have beach parties till the end of March and even April.

In the daytime, people lounge on the shacks’daybeds on the beach or inside the beach shacks, playing backgammon or chess, while having a chilled beer or a chaï, watching others practicing some water sports. Others go and swim or walk along the beach. Hawkers spend their days walking up and down the beach selling pareos, small items or ice-creams, fruits… But you can find empty beaches in south Goa if you like peace.

The tourists who come during this period are from all different places of the world: Indian tourists of course, and plenty of tourists from temperate places, especially Russia for some years now, escaping the cold season of their respective countries.

Summer, the hot season, is the hardest and hopefully the shortest one, usually extending over two months, from the beginning of April to the beginning of June. Sometimes, it starts mid-march. 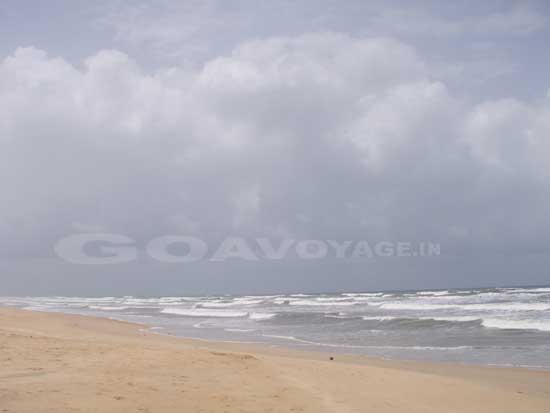 This is the holiday period in India. And I can understand why, it is so hot! It is a strange weather: humidity starts to rise in the atmosphere, and in the same time nature is getting really dry, with reddish and brownish shades. Also the sea becomes less calm and less safe to swim and very warm.

However that is also the period of fruits: mangoes start to appear on the market and also jackfruits and other tropical fruits.

Prices are lower during that time, but animation is still there at night with the Indian people who represent the majority of tourists to come during this period of the year. On the beach most of the shacks have been dismantled, mainly the main restaurants remain open.

Monsoon lasts from June to September. All monsoons are different. Some years, it is very heavy in rain, like in 2007 and 2010. Some others, are very light, like in 2008, half rainy, half sunny or this year, 2015. This is quite pleasant even if, when the sun first shows up, it gets really humid, even steamy: you can see the wet roads starting to smoke with the evaporation of the water! 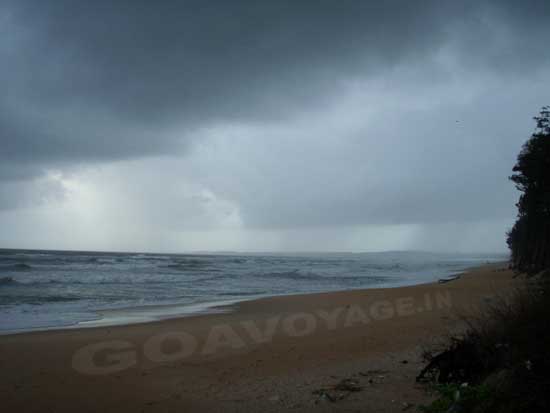 But when the rain lasts for a few days with a grey coat of clouds, the temperature starts to drop. Nights are cool, and even daytime, we can feel some cool air. And if there’s no rain for some days, then, it becomes like in Winter, cool at night, and really pleasant during the day.

Nature becomes green during monsoon and you can find plenty of fruits in the market. The monsoon period is also the most interesting period to observe wildlife: the vegetation become luxuriant as well as all the life related to it: insects, birds…

From mid-August, fishing starts again, after a stop for two months, and the fish market is reviving.

Monsoon is a pleasant season because its atmosphere is really special. There are much less tourists and mainly the locals remain here.

There are no more shacks on the beach, because the sea is rough and the tide higher. So, if you want to enjoy swimming, it’s better to go to one of the many swimming pools that remain open. And you can still enjoy some nice walking on the beach at low tide.

This time of the year is when the prices for tourists are at their lowest. The highest is Christmas, New year.

Anytime of the year has its own appeal here. Goa weather is really pleasant. Choose the period that suits you, and have a nice time here, in Goa !